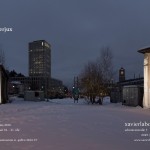 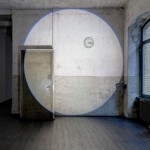 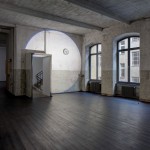 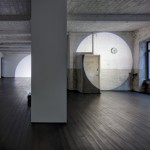 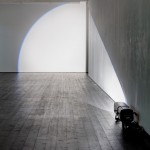 In an era of upheaval and withdrawal, inequity and bionomics, didactic images appear as patronizing reflections of a brutal reality and the saturation of formalistic concerns, anachronistic and gaudy.  In time of crisis, and therefore of crisis of representation, nothingness or almost seems relevant but the slash of Lucio Fontana, the abyss of Yves Klein, the mud of Gutai, the line of Agnes Martin, all expressions of existential interrogation that have re-positioned artistic integrity at the center of civilisation.

As mentioned by the medieval logician William of Ockham: “Pluralitas non est ponenda sine necessitate. (Plurality must not be used without necessity)”. Later, Berlin based composer Arvo Pärt will add: “In Art, everything is possible, but not everything is necessary”. Since the 80’s, Michel Verjux has relentlessly directed our gaze to this void, to a place, a detail in this place, to our own selves.  Through simple but effective white light projection, with recurrent circular shapes, sometime square, fractured, or obstructed by found objects or architectonic elements, the Artist has forced us to redefine our surrounding, the act of seeing and the materiality of an artwork.

In the fall of 2010, Michel Verjux presented an installation in our dilapidated exhibition space before a year of painstaking renovation.  His intervention created a clean and sharp contrast within the ruined structure and decrepitated surfaces, a metaphor of the neighborhood at large.  Today, we have invited the artist to exert his remarkable sensibility and practice of space once again and for a different experience: “Ein sonderbare Erlebnis”.