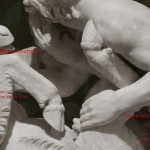 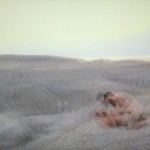 “Panic”, 2014, 3D stereoscopic video projection, color, sound, 90 minutes, is an evocation of the god Pan, shot on Mount Sodom, Israel, in August 2014, the intensity of the conflictual situation in Gaza (panikon deima) to be reflected in this film.

In the middle of the deserted salt mountains overlooking the Dead Sea, two bearded naked men reenact “Pan copulating with a Goat”, the infamous polished marble sculpture found in the Villa of Papyri, in Herculaneum.

Despite their passionate struggle, the expressionless faces of the actors and choreographed coition rythmed by statuesque pauses reveal the reenactment and re-appropriation of mythology by the artist – a critical stance toward a pervasive political and theological practice. Pan is here summoned as a dual symbol of lasciviousness and war-strategic function to induce uncontrollable fear – panic.

The synchronized soundtrack is a deceleration of Daphnis et Chloe, Pan’s evocation by Maurice Ravel for the Ballets Russes. The celebrated movement “Le lever du jour” is digitally stretched from 6 to 90 minutes, transforming the impressionistic piece into an alarming, trance-inducing orchestral score. The dramatic lighting of the sun rising is not without reference to “The Destruction of Sodom and Gomorrah” by Romantic English painter John Martin.

In a paradoxical age of oppression or neo-liberal commercialization through pornography, this film dignifies a timeless form of human bonding, an emotional attempt to represent the indicible nature of physical communication.

Louis–Philippe Scoufaras is a multi-media artist, born 1981 in Montreal, currently resident at the Akademie Schloss Solitude.