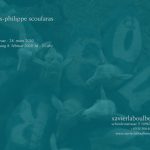 But he had fled from Samos and its masters

And, hating tyranny, by his own choice

Became an exile. Though the Gods in heaven

Live far removed, he approached them in his mind,

And things that nature kept from mortal sight

His inward eye explored. When meditation

And vigils of long study had surveyed

All things that are, he made his wisdom free

For all to share; and he would teach his class,

Hanging in silent wonder on his words,

The great world’s origin, the cause of things,

What nature is, what God, and whence the snow,

What makes the lightning, whether thunder comes

From love or from the winds when clouds burst wide,

Why the earth quakes, what ordinance controls

The courses of the stars, and the whole sum

Of nature’s secrets. He was first to ban

As food for men the flesh of living things:

These are the doctrines he was first to teach,

Mortals, with food of sin! There are the crops,

Apples that bend the branches with their weight,

Grapes swelling on the vines; there are fresh herbs

And those the tempered flame makes soft and mellow;

Milk is ungrudged and honey from the thyme;

Flesh is for beasts to appease the pangs of hunger,

Yet not for all; since horses, cattle, sheep

Graze on the grass, but animals untamed

Wolves too and bears, all feed on flesh and blood.

How vile a crime that flesh should swallow flesh,

Should live upon the death of other lives!

With all the bounteous riches that the earth,

Earth best of mothers, yields, can nothing please

A Cyclops’ banquet? Can you not placate

The urgent craving of your bellies’greed?

But in the Golden Age of long ago

The orchard fruits and harvest in the fields

Were blessed boon and no blood stained men’s lips.

The birds in safety then might wing their way,

No trust betrayed hung fishes on the hook,

And fearless in mid-field the hare would roam.

With never trap or snare or guile or fear

Envied the lions’ diet and gulped down

A feast of flesh to fill his greedy guts,

And paved the way for crime. A wild beast’s death

Maybe first warmed and stained a blade with blood;

That should suffice; creatures that seek our death

To do to death, but not to make a meal!

The pig deserved a victim’s death, whose snout

Dug up the seeds and cut the season’s hope;

The goat that gnawed the vines was sacrificed

The price of guilt. But what guilt have the sheep,

The peaceful flock, born but to serve mankind,

Harmless and simple, born to lives of toil?

How short of memory, how mean of soul,

How undeserving of the harvest’s boon,

Is he who, having just unyoked the weight

Of the bright curving plough, can find the heart

To kill his plough-mate; who upon that neck,

Tired with long toil, whose strength year after year

So many harvests, crashes down the axe!

Nor is that crime enough. Even the Gods

They enrol to share their guilt and make believe

The Powers of heaven are gladdened by the blood

A victim without blemish, beautiful

Beyond compare (his beauty is his bane),

Splendid with gold and garlands, stands before

The altar, hears the prayer, watches the priest

Sprinkle, he knows not why, between his horns

Upon his brow the meal his toil has grown;

Then the knife strikes, crimsoned with blood, the knife

He saw perhaps reflected as it fell.

And while the life’ s still warm, they snatch his guts

And probe and pore to prove heaven’s purposes.

That flesh, so great man’s greed for food forbidden,

You dare to eat, you race of mortal men!

Abstain! Be warned! I beg you! Understand

The ox whose meat you savour, whom you slew,

Worked, your own farmhand, in your fields for you.

Now heaven inspires my tongue and I will follow

The truths of Delphi shown to me and all

The secrets of the sky, and I’ll unlock

Sure oracles of intellect sublime.

Shall be my solemn theme. My soul rejoices

To journey on the highways of the stars,

To leave earth’s dull domains, to ride the clouds,

Devoid of reason; and, for cheer and comfort

Of men’s faint hearts oppressed with fear of death,

Unroll these chapters of the scroll of fate.

You race of men whom death’s cold chill appals,

Why dread the Styx, the dark, the empty names,

Sad stuff of poets, perils of a world

That never was? Your bodies, whether age

Shall waste at last or burning pyre consume,

Be sure, no ills can ever harm. Our souls

Are deathless; when they leave their former home,

To live afresh. Myself (I well remember)

Was once Euphorbus in the Trojan war,

A spear-thrust to the heart. I recognized

Not long ago the shield my left arm bore,

A trophy hung in Juno’s shrine at Argos.

Everything changes; nothing dies; the soul

Roams to and fro, now here, now there, and takes

What frame it will, passing from beast to man,

From our own form to beast and never dies…

Book 15 – The Doctrines of Pythagoras

Translation by A. D. Melville

Louis-Philippe Scoufaras was born in 1981, Montreal; he lives and works in Athens.

Through sound, film, graphic, sculpture, installation and performance, his work explores events drawn from Mythology as an episteme to decrypt modernity, with an iconoclastic insistence.