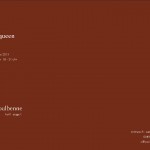 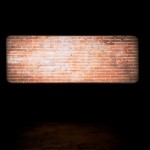 Bricks have been the quintessential construction material of Berlin, acquiring even political meaning when Karl Friederich Schinkel denuded the faux stone plaster that cover it to reveal its Germanicity, versus the Italo-French classical influence that till then dominated official architecture. Mies van der Rohe’s last house (Haus Lemke) in Berlin, prior to his departure for Chicago, is a delicate small brick construction built before the post war reign of the International style and its ubiquitous concrete component.
Steve McQueen’s Rayners Lane, 2008, 16 mm film, color, silent, continuous loop, 10 minutes, is a film of a brick wall presented as a single projection, in the entire exhibition space, on a plastered wall which double an original brick wall of the gallery located in a late 19th century metal factory.
This mise-en abyme insists on the sublime deceptiveness of the image, a stasis that provokes both a suspension and expansion of perception as well as dissolution of time and space.
This film was shot in Rayners Lane tube station, North London, designed by Charles Holden in the early 30’s, although brick remains an enduring material and a vernacular motif of all Northern Europe. Its symbolism of transition between nature and man’s hand renders buildings an almost organic extension from earth.