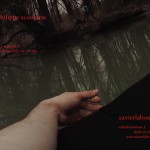 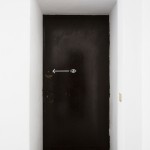 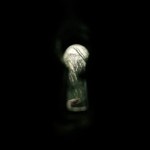 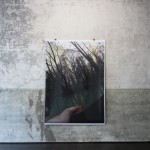 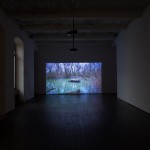 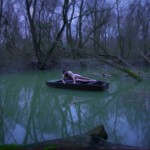 Louis-Philippe Scoufaras’ N, 2016, follows Panic, exhibited in 2015 * and constitutes the second elements of The Trilogy of Terror, an ensemble composed by three chronophageous films reinterpreting events drawn from the Antique mythology.

Featured through single-shot video digital recordings, the three choreographed productions are recorded in sensitive geo-political locations and feature the actor Arthur Gillet as a Greek god archetype in straining performances. The digitally decelerated music compositions, originally written between 1911 and 1916, are part of a dramaturgy that unites the three performances in a symphony in three movements.

N, 2016, single channel video projection, colour, sound, 90 minutes, is filmed on a creek stemming from the Danube, at the border crossing between Hungary and Austria. Narcissus is laying flat on a barge. In slow motion gestures, the naked demi-god awakens and following his reflection in the water engages sequentially in onanism to the point of hypothermic collapse. The performer’s hyper-presence evokes stillness and intensely controlled micro-movements practiced in Butoh.

The film exudes a Romantic painterly quality, although the unconventional physicality of the muscular actor, wearing a camera harness, breaks with the depiction of an adolescent as the classical embodiment of Narcissus. The action spans from crepuscule to night, while a digitally stretched rendering of Nikolai Tcherepnin’s A Woodland Creature Awakens, the second movement of his Echo and Narcissus ballet, 1911, constitutes the soundtrack.

In vis-à-vis, a large format inkjet print with overlapping screen print with animal blood (goat). The image is a film still from the point of view of the Go-Pro camera attached to the actor’s body, multiplying the trap between the Narcissus figure and the technological mise en abyme. The giant letter N appliqué is for the title of the film.